I have some great news! It seems that Hollywood is finally retiring the zombie and vampire fads of the past decade! Granted that earlier this year we did see the release of "I, Frankensten" and "Vampire Academy", but the fact that you can count the number of undead movie releases on one hand, is a great sign.

Yes it seems the champion is being dethroned, so what pray tell is going to take it's place? Everybody always jokes about how Hollywood is fresh out of ideas, but movies will still, inevitably, come out. There is a trend on the rise, and "Twilight" and "Hunger Games" are serving as the bridge into this new drift of film.

Prepare for the reign of young adult fiction book movies.

Last year saw the release of plenty of these films, including (but not limited to) "Enders Game", "Beautiful Creatures", "The Mortal Instruments: City of Bones", "Percy Jackson: Sea of Monsters", "Hunger Games: Catching Fire", "The Host", and many more.

The danger is that they're being replaced with as many Hunger games clones as possible. Now don't get me wrong, "Hunger Games" was extremely well done (though a bit unsettling for my tastes, what with the child murder and all). My issue with this is that because it was made so well, every studio wants to emulate it with every book they can get their hands on.

That isn't necessarily bad, but it could (and seems like it will) get old really fast. Expect to see a lot of these in the next year or two. 2014 will see the release of "Divergent", "The Maze Runner", "The Giver", and "Hunger Games: Mockingjay part 1" just to name a few. Disney also announced last year that they'll be helming a movie based on the "Artemis Fowl " book series. Any way you slice it, its a great time to be a young adult actor/actress in Hollywood.

So what is the "Hunger Games" theme that everybody is playing off of? Well, there's a few key elements:
1: Lead character is 14-17 years old.
2. Dystopian setting (anti-utopia, usually controlled by a well meaning, but overbearing government)
3. Love triangle
4. Dark/gritty color scheme

But I do have a big fat problem with this, in a way. Most of these books are part of a series (Twilight, Hunger Games, Percy Jackson, Enders Game, etc.), and the movie big-wigs are milking the crap out of it. Aw hell, I'll just say it. STOP DOING TWO-PART MOVIES. This started with Harry Potter, and was very necessary, as the book was gigantic, and had a LOT of story that was being built up over the course of seven books. But then you have a series like Hunger Games. I haven't read the books, but I've seen them, and they're not very big. If they can fit the first two into their own movies, they do NOT need two movies to tell the last book. Hobbit, I'm looking at you too. One book, three movies?! But I digress...

In short, get ready to be sick of movies starring angsty teens in repetitive plots. I'm placing my bet that we'll be seeing a lot of them for the next 10 years or so.

Now if only they had waited until now to do an Eragon movie...maybe it would have been at least a little better.

The Story:
Based on the comic book series of the same name created by James O'Barr, The Crow follows Eric Draven, a musician living in a crime-ridden town with his Fiancee Shelly. The movie begins with the dual homicide of both Eric and Shelly on Devil's Night, October 30th. One year later, Eric is resurrected by a crow and given supernatural powers in order to reap revenge upon his and Shelly's murderers.

If you like...:
The Warriors, The Fifth Element, Robocop, Demolition Man, any Batman movie from the 80's or 90's

The movie garnered a lot of attention due to the accidental death of lead actor Brandon Lee during filming. To sum up, due to an error by the prop master, Lee was shot with a gun that was supposed to be filled with blanks, and was fatally wounded. After rewrites and some time away from production, the movie was completed using body doubles and special effects. The Good:
The Crow carries a vibe very reminiscent to what I feel that Tim Burton's Batman movies SHOULD have looked like. Everything is very dark and gritty, giving the movie somewhat of a post-apocalyptic vibe due to the amount of crime the city experiences.

For a mid-90's action movie, the fight scenes are definitely a lot of fun. Eric Draven has no qualms about killing, which makes him a fun anti-hero to root for. Draven definitely gives off a terrifying vibe when he dons the "crow" make-up, and doles out vigilante justice. His character reminded me of what The Joker might look like if he wasn't so colorful. Scary for sure, but definitely awesome. Ernie Hudson (Ghostbusters) lends his talent excellently as Draven's support, police sergeant Albrecht. If Draven were Batman, Albrecht would undoubtedly be his Commissioner Gordon.

Let's be honest, there's a reason that Brandon Lee wasn't in a whole lot of movies over the years. As an actor, he wasn't the best. Then again, Draven, his character, isn't really expected to have long, heart-felt monologues. He's expected to kick ass, which he does. Still, in certain scenes it can be hard to get past his shaky voice work.

The plot is pretty bland as well. I mean, it gets the job done. He's out to kill four specific gang members, and that's all. But halfway through the movie we're introduced to a crime lord who basically gets himself involved just to be a dick. Top Dollar (played by Michael Wincott) definitely is a fun villain, if not a bit creepy with the ladies, but still felt a bit unnecessary in the overall plot, especially as the main villain. A minor complaint, but it did bug me.

Verdict:
6.5 out of 10
It's definitely fun, but other than the tragic death of lead actor Brandon Lee during filming, I'm not entirely sure that it needs to be called a "cult classic". Then again, if you're looking for a fun action packed 90's movie, give it a try.

Posted by Ben Butzow at 8:40 AM No comments:

I'm back! It's been a busy few weeks, but here's a new review for ya!

Plot: The movie functions as a sequel to the 1997 video game Final Fantasy VII on the Playstation. Without spending several hours recapping the story, characters, and spoiling the ending of the game, I'll try to summarize:

*takes a deeeeep breath* The movie itself actually begins with a brief summary of the events of the game, from beginning to end. The game (and movie) centers around Cloud Strife, an ex-soldier turned mercenary who assists a rebellion who is seeking to take down an evil corporation called Shinra, whose goal is to siphon the planet's life stream, and convert it into energy, unaware that in doing so, they are killing the planet.  Enter Sephiroth, a genetic experiment created by Shinra in an effort to create a perfect soldier, who wants to take over/destroy the world in a bloody quest for vengance against his creators. **SPOILER ALERT** He was killed during the ending of Final Fantasy VII.

The movie takes place several years after the events of the game, during which time large numbers of children have been stricken with a mysterious ailment that many believe to be the doing of the planet, angry at those who tried to kill it. The heroes of Final Fantasy VII must reunite in order to stop three mysterious new enemies seeking to resurrect Sephiroth.

Confused? It's to be expected. If you're not confused, you've probably beaten Final Fantasy VII, and watched the movie already. The game itself spawned a multitude of spin-off games, and a lore that spans decades. It's actually rather impressive considering it all came from one video game. If you want to know more, definitely go back and play the game, or check out the Final Fantasy Wiki. But here, I'll only be covering the movie itself. 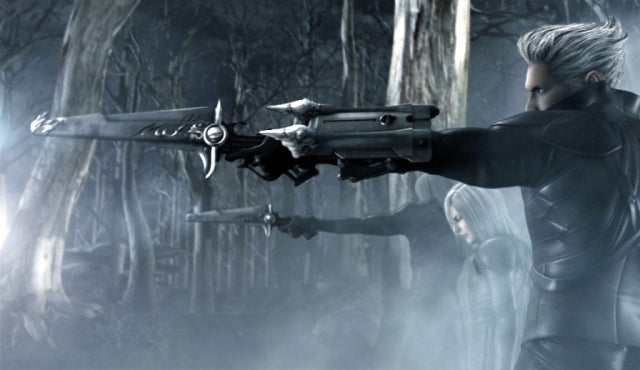 The Good: I've said it before, I'll say it again. With animated movies maintaining popularity as they do, it's important for companies to set theirs apart in some way. Advent Children does this through gorgeous, action-packed visuals. And for this movie being almost 10 years old, it still looks beautiful. The animation is crisp, hair and clothing moves in a believable way (for anime-styled characters that is), action scenes invoke a sense of awe, whether it be in the scale of the monsters, the speed of the action, of the visuals of the sparks flying, or magic spells being cast. This is also one of the earlier computer-generated movies that I remember seeing that managed to fit such a massive amount of people on-screen at the same time, which still manages to impress.

In terms of sound, the score continues to impress, evoking a range of emotions. Most of the soundtrack consists of orchestrated versions of music pulled straight out of Final Fantasy VII. My personal favorite is the piano-only version of the video game's battle music. The voice acting is also wonderful. Popular voice actors including Steve Blum (Cowboy Bebop), Steve Burton (Kingdom Hearts), and Quinton Flynn (Metal Gear Solid 2) are instantly recognizable by their fans, and bring into the movie the talent that they're known for as video game / anime voice actors.

If you're a well-versed fan of the Final Fantasy VII universe, the story is easy to follow, and offers plenty of fan service, whether it be a familiar place, or a familiar face.

In 2009, an extended version of the movie was released on Blu-Ray, titled "Final Fantasy VII: Advent Children Complete" which includes 25 extra minutes, and many completely redone scenes. For hardcore fans, this is a must.

The Bad: I'll start with the obvious: If you're NOT well-versed in the game, you're going to have a rough time with the story and characters. There's a lot to this movie, and aside from the short intro to the movie, the makers definitely assumed that if you are watching the movie, you already know the plot of Final Fantasy VII.

While this isn't necessarily a bad thing, it can get dangerous in the fact that sometimes it seems they assume too much. Personally, I'm a big fan of the game, and have played several of the spin-off titles. That said, I still find myself scratching my head a few times during the movie.

No matter which way you look at it, the movie is presented stunningly. It's worth a watch solely for the visuals, but if you are familiar with the series, it is exponentially better.