In honor of  my favorite time of the year, as well as the semi-recent announcement that Capcom will be re-re-releasing the original Resident Evil on PS3, Xbox 360, PS4, and Xbox One as an HD re-remake, I grabbed a friend, and set out to conquer a game that I've owned for almost ten years, and had yet to beat. So let's take a look at the PSone classic that created the survival horror genre as we know it today.

Story:
If you play video games, and you haven't at least tried a Resident Evil game, shame on you. But here's a quick, spoiler-free rundown of the story:

It's the year 1998, in the outskirts of fictional town Raccoon City. Over several weeks, citizens have been going missing, and many have turned up dead, reportedly eaten by what some were calling "monsters". You play as either Chris Redfield, or Jill Valentine, two members of an elite special ops unit called S.T.A.R.S. (Special Tactics and Rescue Squad. Basically a fictional SWAT team). You're objective: Locate the crashed helicopter of your squad mates. But things quickly go awry, as you run for your life from a pack of monstrous dogs. You take solace in a large mansion nearby. Once inside, however, the horrors of a mysterious zombie-ridden conspiracy await you...

First thing's first: The opening cutscene is legendary among gamers due to how absolutely horrible the acting is. The creators of the game decided to use live action actors, and the result was nothing short of eternally memorable. Even if you have no interest in playing the game, I'd highly recommend you at least give the scene a watch here: https://www.youtube.com/watch?v=UWo0Hhx07Pc

For our playthrough, we decided to play as Chris. He starts out with a gun, but if you play as Jill, you'll get the ability to pick locks, and two more inventory slots (trust me, those two slots make a WORLD of difference). 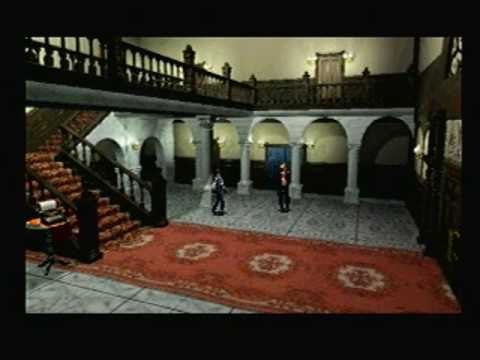 Presentation:
To say that I'm a wuss when it comes to scary things is an understatement. That said, however, after almost twenty years, this game still harbors some legitimately creepy moments that don't resort to simple loud noise jump scares. The basic emotions of the player are where a lot of the terror comes from. For example, you can only carry six items at once (as Chris). Obviously you'll want a weapon, and yeah, you're going to need some ammo too, so count out two of those slots. Carrying healing items is a smart bet, and you'll need several keys as you explore the mansion. Because of this, inventory management adds to the suspense throughout your journey. Should you bring more health or ammo? What if you run into a required item for later? What happens when I need to carry so many items that a weapon may not be an option?

While not every room houses enemies, you never know when you'll run into them, so each new door you enter tends to get the blood pumping. Not to mention the classic door opening cutscenes used every time you enter or exit a room...They are spooky for sure, but they do get old after the amount of backtracking you'll be forced to do.

Gameplay:
The gameplay is something that a lot of long time fans tend to enjoy, and new players seem to hate. It's hard to explain without experiencing them for yourself, but moving your character can take a bit of practice. That said, when you're good at it, movement is a breeze.

Something I have always loved about the Resident Evil series (well, up until RE4 anyways) was the camera angles. The entire game plays out almost as if you were watching security tape footage. As you walk around each new room, the camera angle switches to different corners of the room, encouraging you to explore every nook and cranny. Be careful though, because some rooms will have some nasty surprises that the camera angles are hiding.

My main complaint for this game was that without a guide, the puzzles are incredibly difficult. To access different areas, you have to collect four crests. But to get those crests, you need four keys. But to get some of those keys you'll need random gems and even MORE crests. This has become a mainstay in Resident Evil games, almost classifying them as horror puzzle games, rather than action. But even with a guide, this game took us eight and a half hours to beat. If we didn't have a guide, we probably wouldn't even be halfway done. This isn't a bad thing, and by no means a deterrent from trying the game, but its something you'll need to mentally prepare yourself for, and its the reason that it took me so many years to finally sit myself down and BEAT it.

There are some puzzles, however, that really stand out as unique, challenging, and very fun. One such is during a scenario (in Chris's story) where you briefly control a different character. Given two vague numerical hints, you are tasked with attempting to combine four different chemicals in order to reach a certain combination. (It sounds odd, but that's the best I can describe it without giving away any plot spoilers) This sequence was agreed between the two of us to be the most fun, challenging, yet solvable puzzle in the game, and can be completed with significant challenge, and without a guide.

Tips:
Before I get to my final verdict, I felt it may be helpful for those interested if I shared just a few of my experiences that might help you, again without spoilers.

-Choose your character carefully!
As I mentioned, the game lets you play as Chris or Jill. While I'd recommend playing through as both in order to get the full story and development of characters, it is understandable that you won't want to have to run through the same puzzles over and over. Chris was our choice, simply because I remembered that he starts with a gun, while Jill doesn't. She does, however, have the ability to pick locks, and gets eight inventory slots, instead of Chris's six slots. And trust me, that makes a HUGE difference later in the game.

-Experiment with items
The healing items in the game have a few different forms, but the one you'll run into the most are herbs. There are three different kinds (the game will explain the difference so I won't bother), but what I will say is that you should definitely experiment with them. We didn't realize until about 3/4 through the game how much it would have made a difference if we had tried mixing the herbs earlier!

-Use a guide
I know it may seem like cheating, or it may seem obvious, but the simple fact is we had twice as much fun when we knew where we were going as opposed to the several hours we spent aimlessly wandering.

Verdict:
I've always known the story of the games, and I've watched a friend of mine  beat the first three games what feels like a hundred times. And yet playing through it myself after all these years still felt like a fresh, spooky experience that I would recommend to any action/horror fan!

The puzzles can be a bit lengthy, the combat can get a little sticky, and the backtracking will be the main reason that your playthrough takes so long, but in the end it is definitely worth it.

It's not expensive, and it's available on basically every platform in some form.